Request a Service or Repair Quote

Reflections on Carlisle Enterprises and the Old HP LaserJet 4000

Reflections on Carlisle Enterprises and the Old HP LaserJet 4000

Well, the primary vendor that I get our Remanufactured 27X toner for the old HP LaserJet 4000 informed me recently that “We are obsoleting this cartridge once we sell through the stock.”  And, they only had about 35 left.  I have been in the industry now for 18 years, and the HP LaserJet 4000 was the first printer that my Dad trained me on to clean and repair.  It was also the last printer that he ever learned to clean/repair.  He said that if I could learn how to clean a service a 4000, then most other printers would be similar. 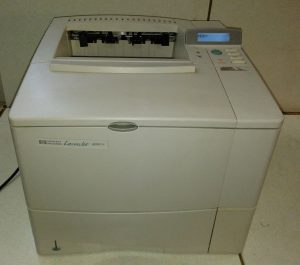 The old reliable HP LaserJet 4000… But it is obsolete today.

I then called Dad and told him that the ol’ 27X had finally had it’s day, and we began to reminisce about the business through the years.  He told me a story of a couple crazy repairs he remembered from the ancient HP IIP and LaserJet II printers.  Then we figured that the last service call he may have gone on by himself was to a school in Schaumburg in 2012!  I think sometime after that though, we did go clean through some printers together a couple times at a customer in Aurora.  I always enjoyed those times, cleaning through the printers together and then going out for a late lunch somewhere, usually Portillo’s.

Me and Dad at the 2019 Illinois CPA Society Show

Times are indeed a-changin’.  As many of you know, Nolan officially “retired” back in the summer of 2017.  He still pays the bills and does the financial “stuff,” which is a lot, but the day to day operations are my full responsibility.

Ever since my Dad read Think and Grow Rich by Napoleon Hill in the late 1960’s, he had always dreamed of starting his own business.  He did have a couple businesses throughout the 1980’s, but he started Carlisle Enterprises in 1991, after replying to an ad in Entrepreneur Magazine.  Then after having two sons, he dreamed of being able to build a business up enough to bring one of his sons on board.  Well, since the summer of 2003, I have been along for the ride here at Carlisle Enterprises.

It has indeed been quite a ride these past 18 years.  I am thankful for the relationships with each of my customers that I have been able to build, and I look forward to seeing what the future holds in store for our family business.  Maybe one of my sons (or daughter) will be able to join me one day…

So, if you need to replace your soon to be completely obsolete HP 4000 or any other aging printer, just contact me; and I will help you find the perfect OEM/New or Refurbished HP LaserJet Printer or MFP for your home or office 😊 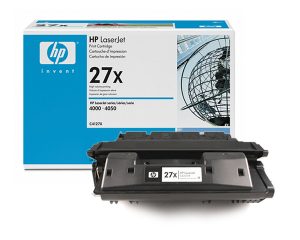 The soon to be totally discontinued HP 27X Toner